The first type of lighting over the tables was candles and as you will appreciate they didn't give much light and there was the danger of the wax dripping onto the cloth! The picture above circa 1694 shows Louis XIV playing billiards, the candles can be seen at the top centre of the picture.

They lighting over the table then moved onto oil lamps, usual six lamps over the table. Again care had to be taken to ensure that after filling the oil did not drip onto the cloth. 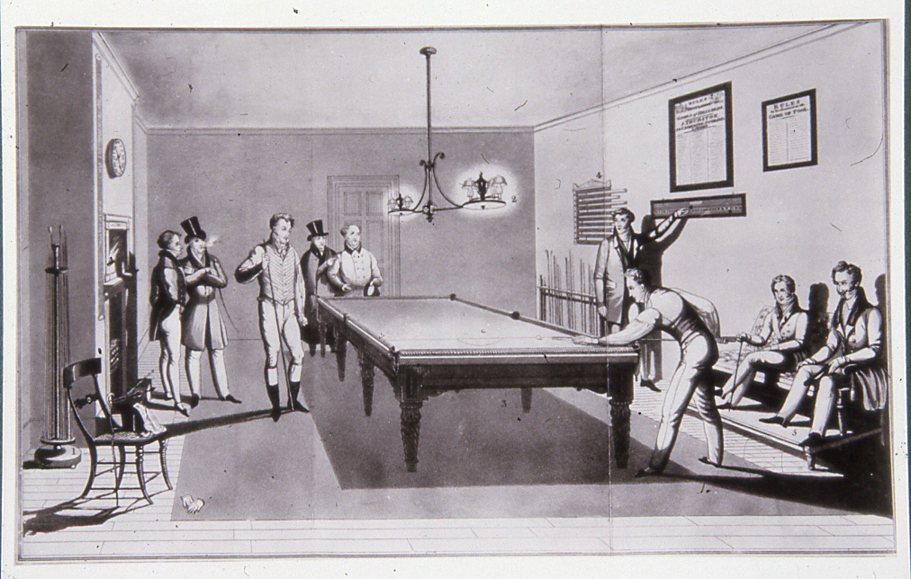 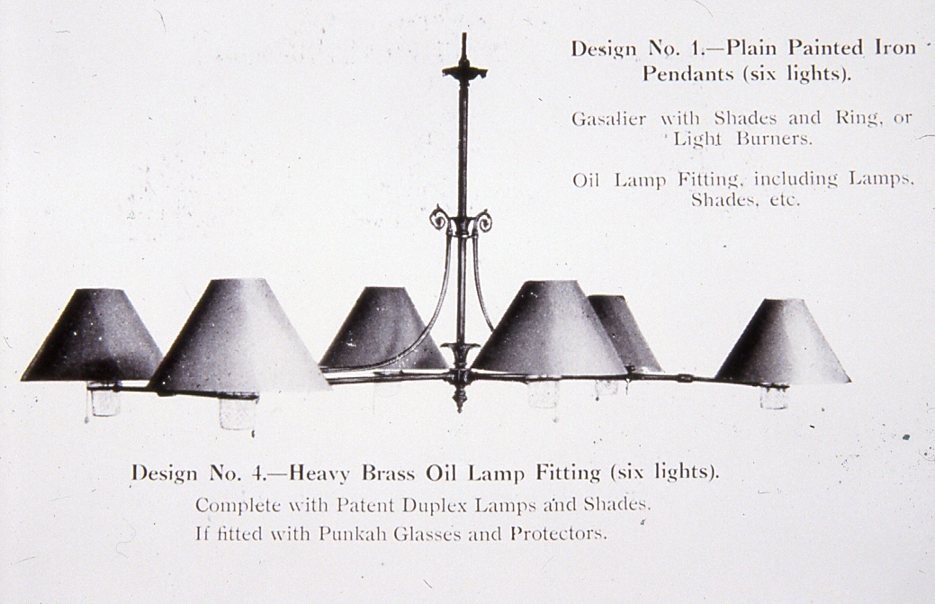 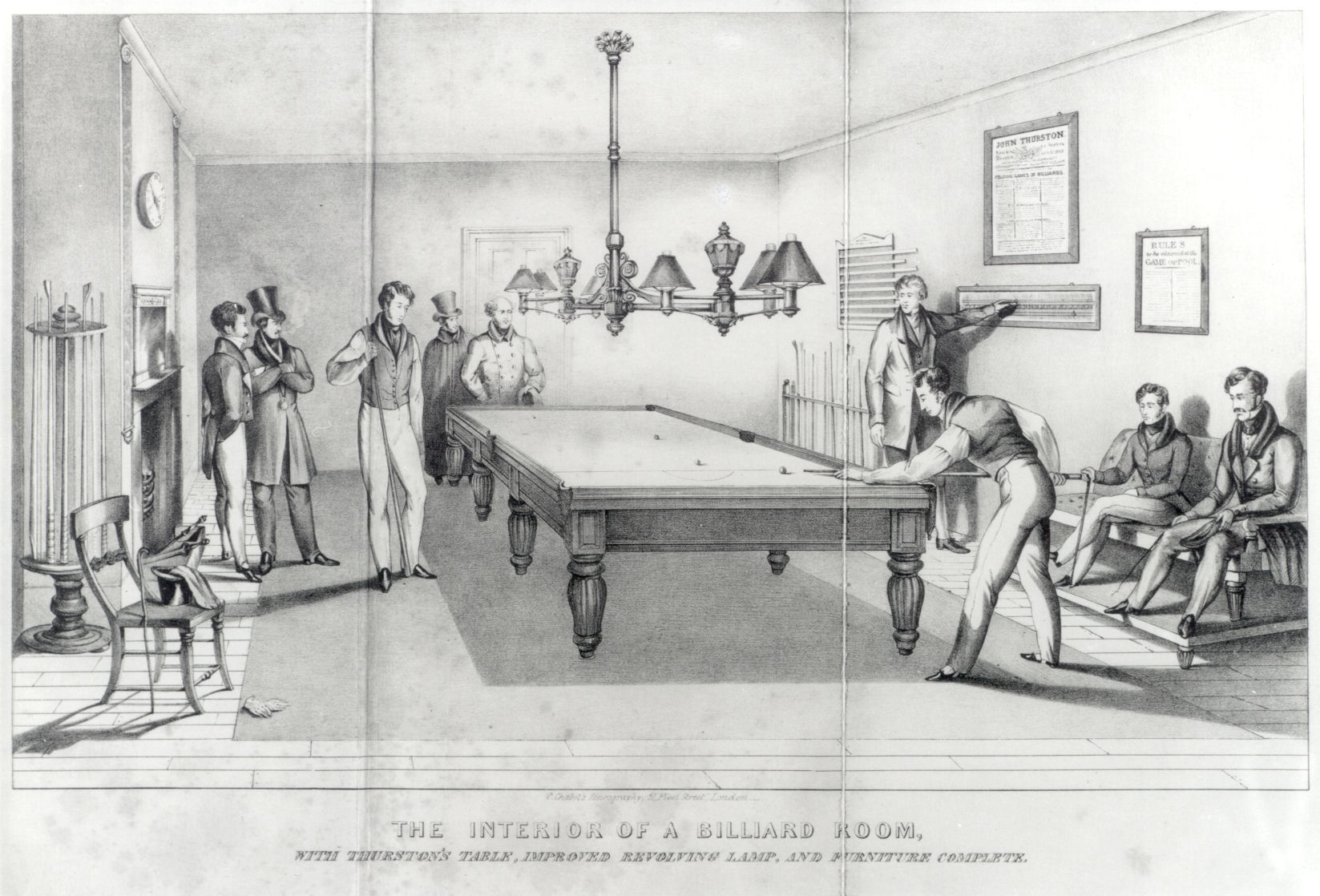 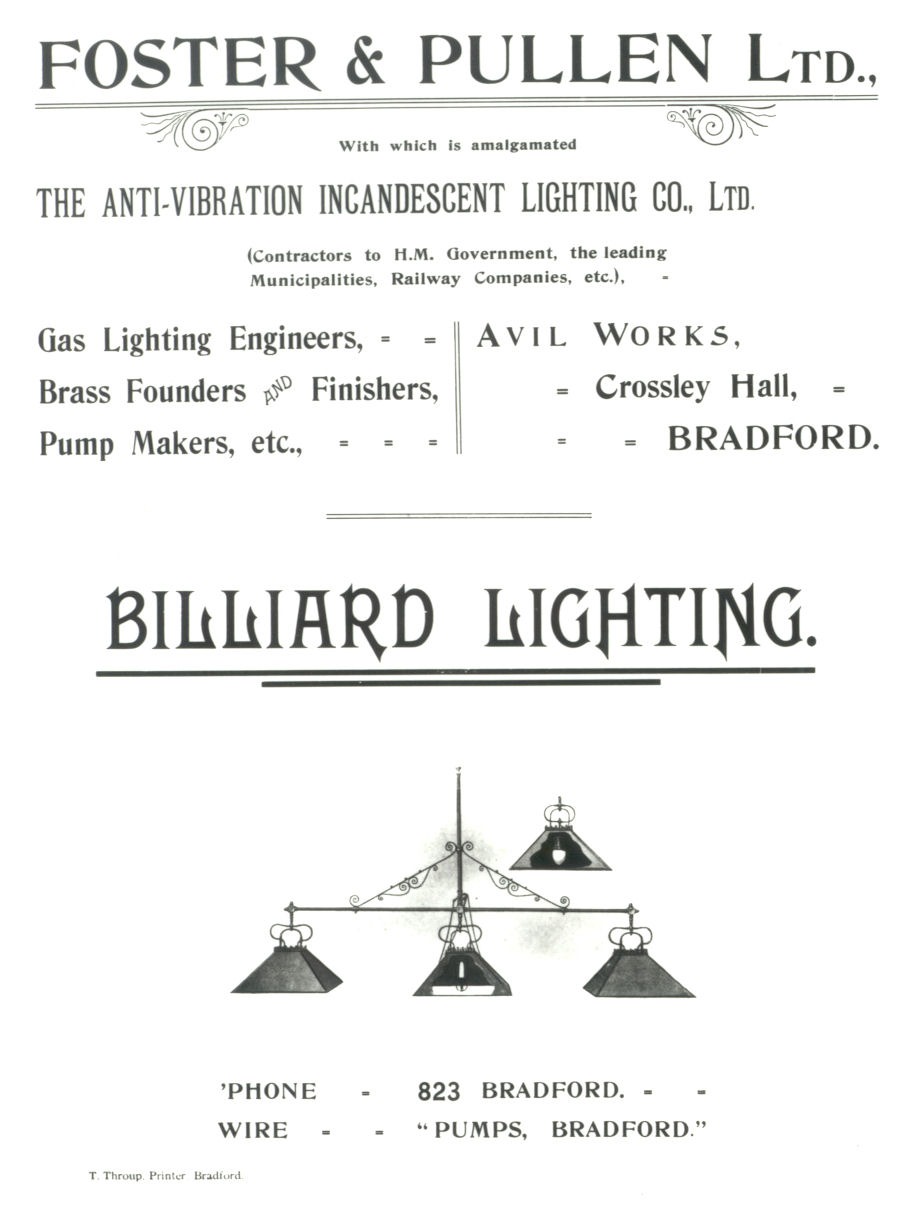 When electric lights replaced the gas fittings the easiest way of carrying out the improvement was to 'electrify' the gas lighting shades. 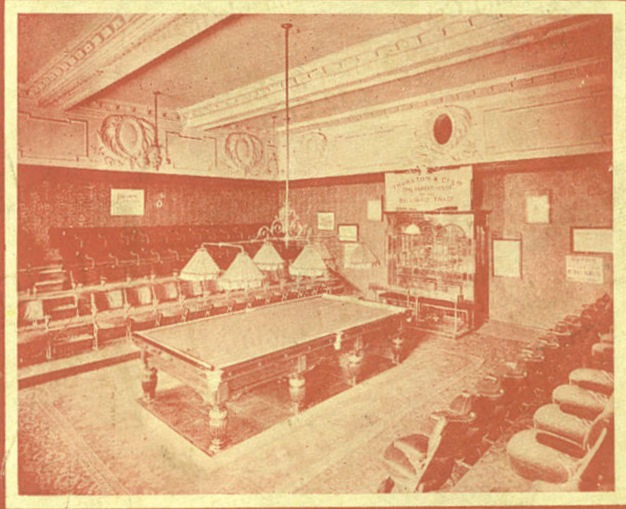 Thurston showroom, Leicester Square – a typical electric lighting unit can be seen over the table.

The problem with this style of shade was that the actual circular shade cast shadows over the playing area. So several designs of shade were tried to remove the 'shadows'. One of the first was the 'Skid More' shade. It was installed at Thurston Match Room in Leicester Square and can be seen in the picture below. 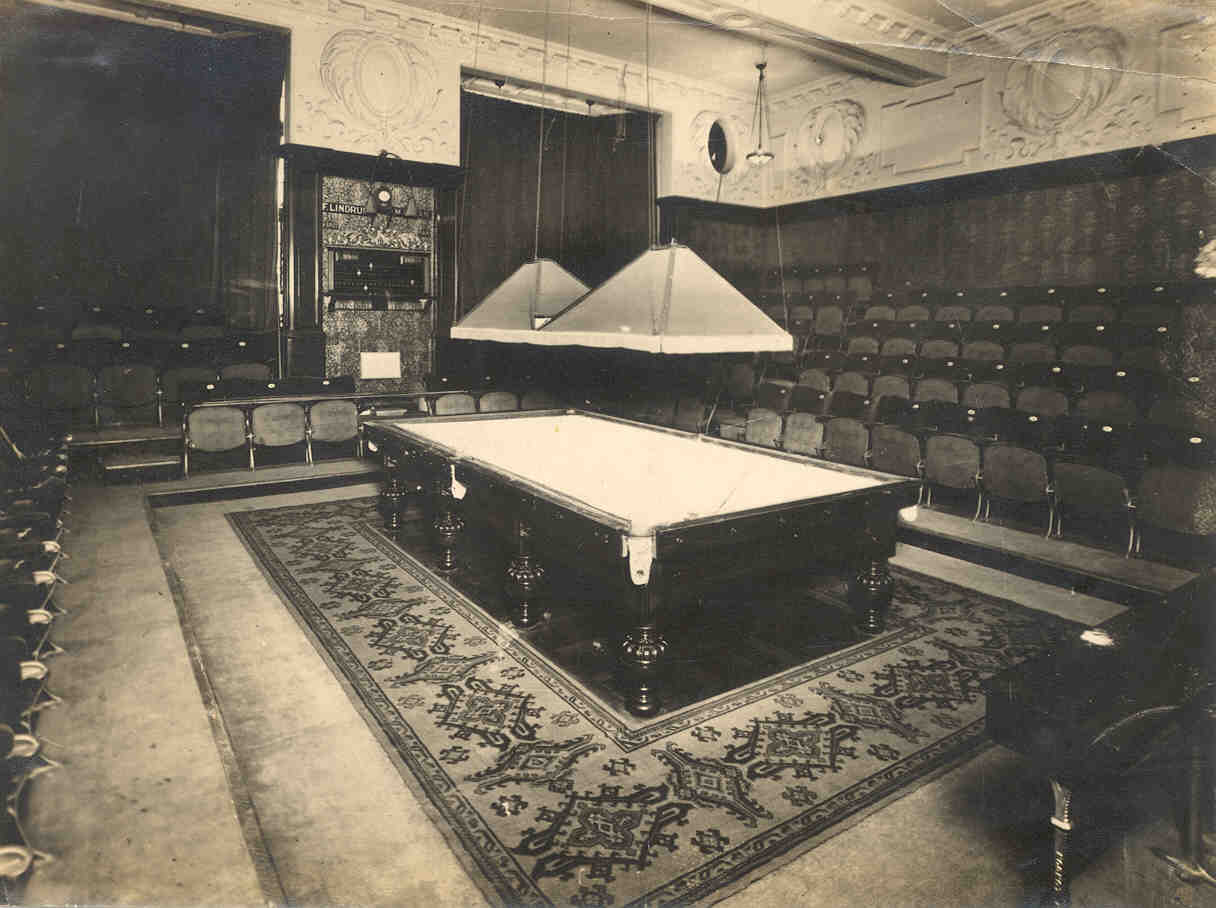 The idea was that given the shape of the shade the light would fall evenly over the table and the actual shadow produced by the shade would fall outside the playing area of the table. The problem was that the Skid More shade was very deep and required a high ceiling for it to be hung from.

The trough type shade most players would recognise, allowed for the shades to be hung from a more 'standard' ceiling height. Probably the most famous design for this type of shade was the Hartley shade. This was a sheet metal shade which had a pair of bulbs at each end. 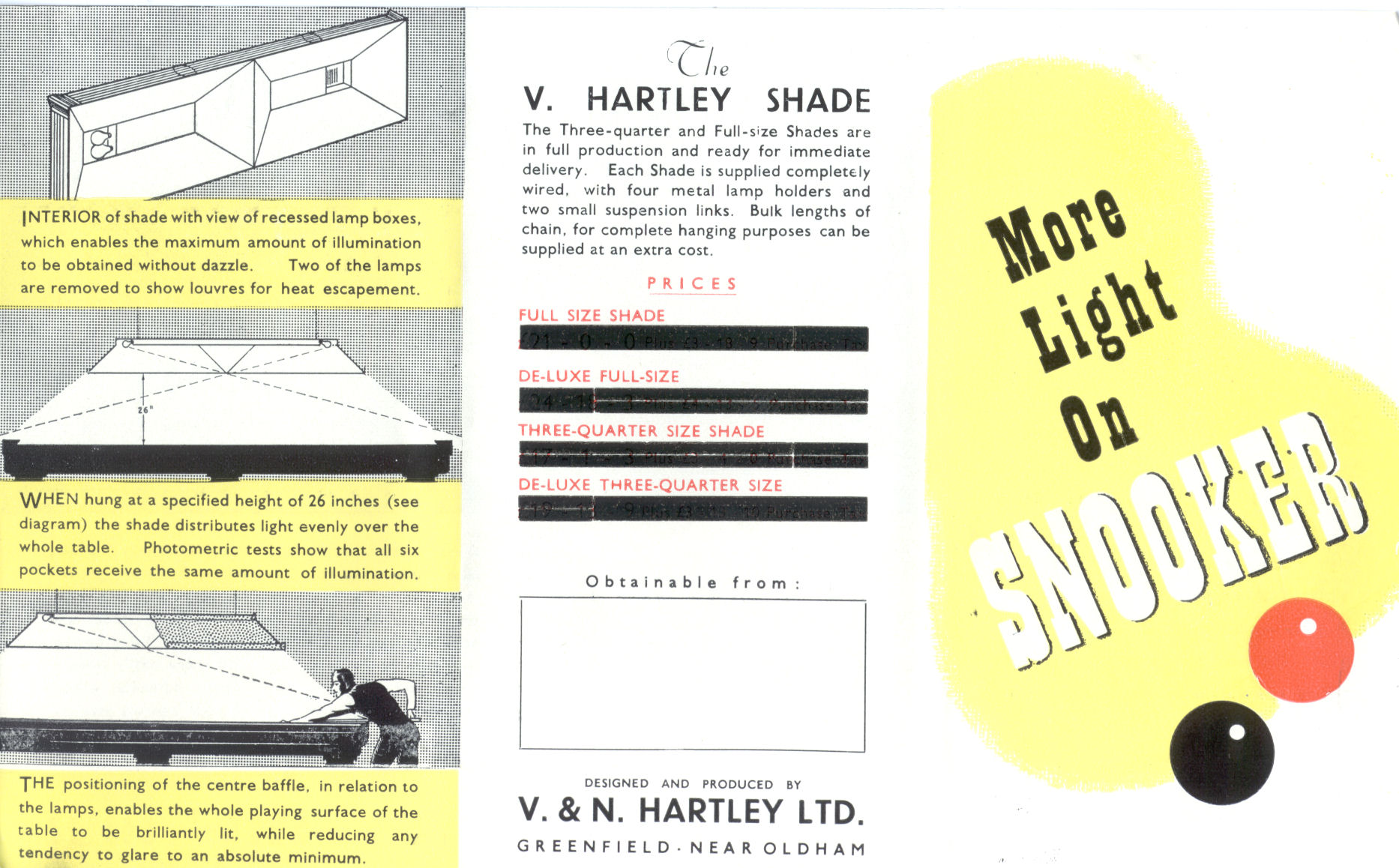 A lighter weight 'trough' type shade was designed by E.A. Clare & Son and their catalogue illustration shows how, when hung at the correct height the lights illuminated the table. 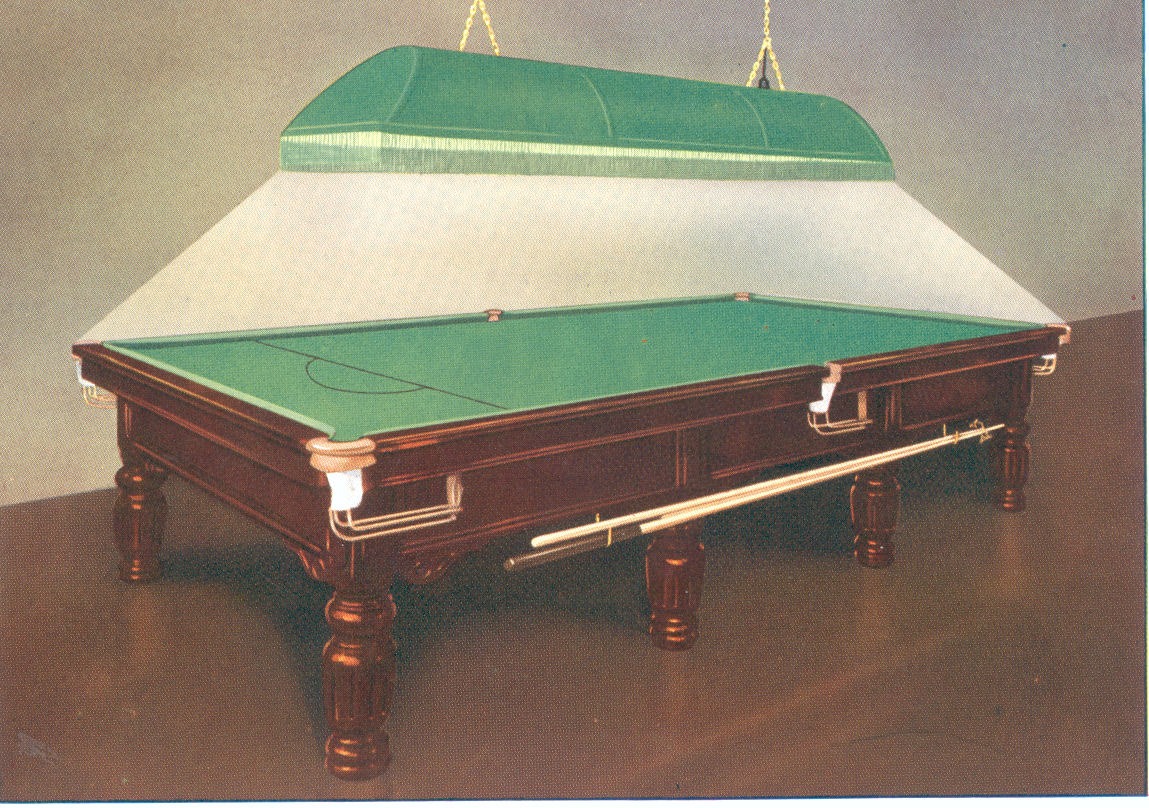 The 'none shadow' shade had three lamps in, although the better ones had five lamps fitted. The five lamp versions recommended that the bulbs used were no stronger than 60watts. and that was fine for many years but as both players and spectators became use to the bright lights of televised tournaments, demand for brighter lighting on the tables was such that higher wattage lamps were used.

However this put up the cost of running the table and most Clubs have been reluctant to put up their charges via the table meters. To try and save on the electricity and improve the illumination over the table some clubs incorporated fluorescent tubes into the 'trough' shades.

Now the way to be both economic with power usage and give really good lighting combined with a modern look is to replace the 'trough type' shade with a  'Luminaire'. This also has the advantage of allowing players to see across the room as they are slim fittings. Thurston have designed their units to make it easy to fit in place of a 'trough' shade as you use the same hanging points and thus only need an electrician to connect the unit to the same supply as the existing shade. 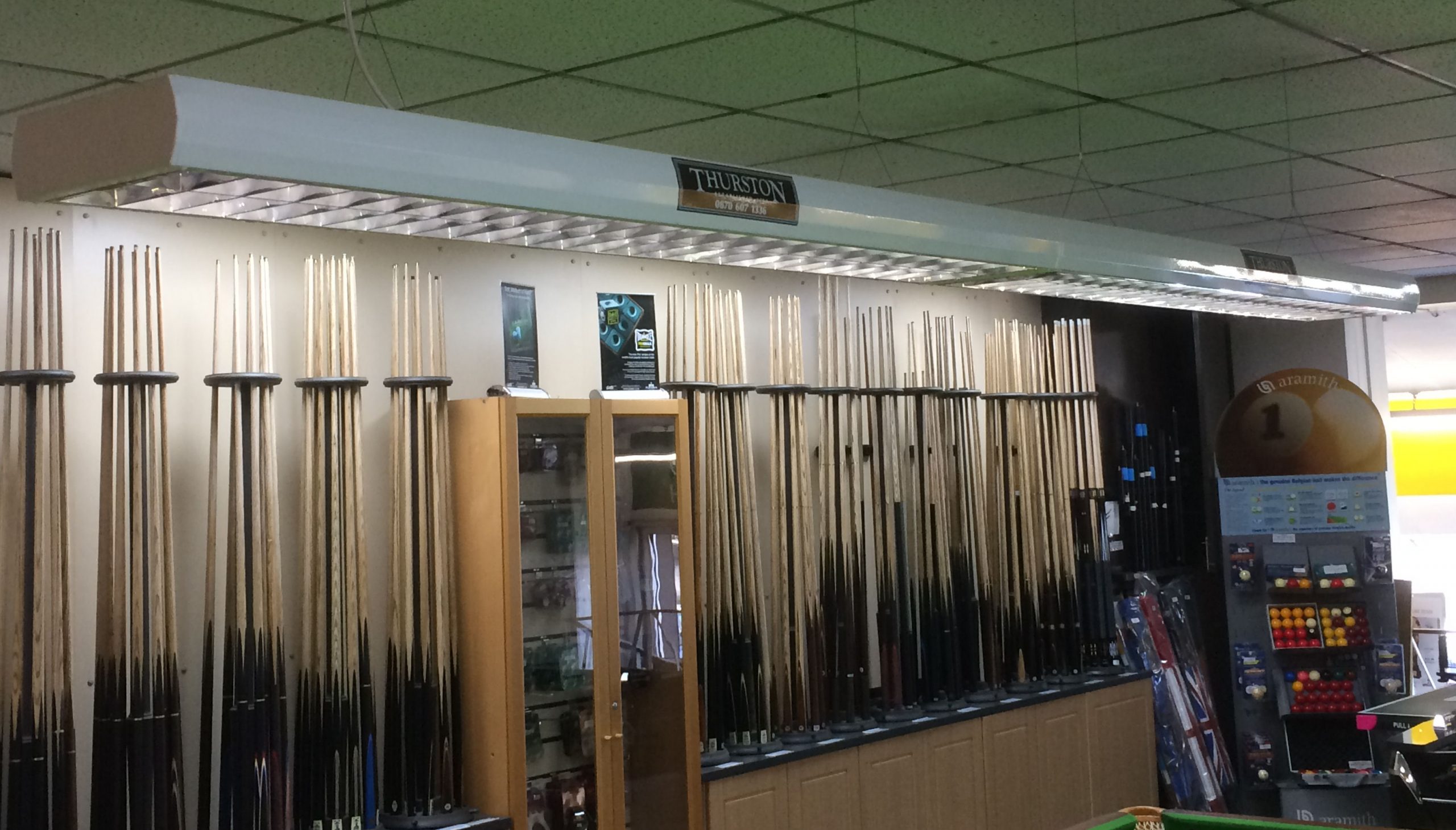 A Luminaire hung over the practice table in Thurston Liverpool Showroom.

This style of lighting not only gives excellent illumination of the playing surface of the table, it also is cheaper to run and has the additional advantage that it improves the look of the snooker room as it is slim and  less intrusive in the room.

To get the latest information on Snooker Table and Pool table lighting just contact the sales department at THURSTON  on  0151 482 2700 or email thurston@eaclare.co.uk