Table Bowls – bowls made to be played on a Snooker – Billiard or Pool table.

There seem to be at least three versions of this game of bowls designed to be played at table height two of which have their roots in the UK the other in Australia.

Trying to trace the history or roots of these games has been all but impossible. However general consensus indicates they were probably started in the Victorian era. 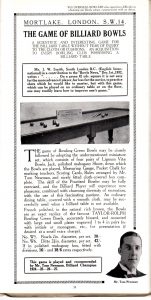 Tom Newman, a famous Billiard Champion of the time, endorsing the game

Two of the table bowls version are designed for play on Full Size Snooker / Billiard or Pool tables and rather like Flat Green and Crown Green there is a North / South split.

In the Blackpool and Cumbria area the table bowls are two inch in dia.  Were as the version played in the South (East) of England use a 2 ¼ inch bowl. Although in an old catalogue (dated 1950) we have found reference to 2 ¼ inch and 2 ½ inch. As you will see from the illustration below these table bowls were made from Lignum Vitae. The old Lignum Vitae table bowls would likely have been made from quartered timber and would therefore have lost their shape. This would have required them to be re-worked and it is therefore safe to assume that they would have reduced in size so that the 2 ¼ inch would have been nearer 2 inch after being trued and the 2 ½ inch would be near enough 2 ¼ inch. Now Table Bowls are made from a similar composition as used in 'full' size bowls. 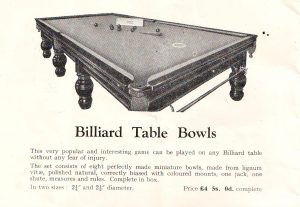 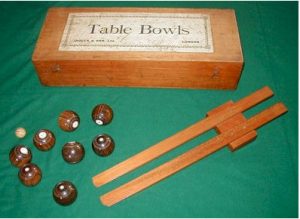 The Australia version played mainly in Northern Queensland is based on a purpose built table and they too use a 2 inch bowl.

There does not seem to be any set rules as there is no governing body and so slightly different local variations will be followed. All the rules seem to have the same basic structure, the following are the rules issued with the Drakes Pride sets :-

A Foul involves the penalty of removing a player's wood (bowl) from the table, and it fails to score. A foul is any of the following :-

It is said that there are some snooker / billiard tables in this region that have been install in such a manner that they can only be used for table bowls, it being impossible to get all round the table! 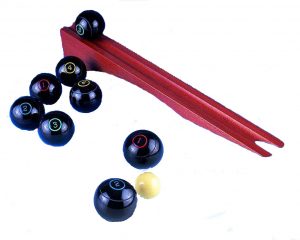 The set of bowls comprises 4 pairs of black 2 inch dia. bowls, a jack and a delivery chute. Each pair of bowls has a different bias strength. The pairs are colour coded to indicate their bias strength as follows - Yellow ringed bowls have the least bias next increasing in bias are the Green ringed increasing to Blue ringed increasing to the strongest bias Red ringed pair. The jack is a plain white ball (non biassed) usually 1 3/8” ( 1 1/4” has also been used). The delivery chute has a groove along its length down which the bowls are release.

In Carlisle, Cumbria there is a strong Billiard Table Bowls League and even there they have slightly different rules between the Pensioners League afternoon matches and the Evening League matches. In November 2011 the writer was invited to see a Pensioners League match at the RAOB Club. The set of bowls used were an old set of Taylor Rolph Lignum Vitae about 70/75 years old. The host club provided the bowls and the visitors had first choice of the pairs that they would use. As the set bowls have been in play for so long both teams knew the quirks of each pair. Although they were called pairs and numbered up as such ,because of their age and the fact they were made from quartered timber, they did not run as a pair. So each player carefully examined the bowls so they selected the best one for their desired shot.

The bowler places the release chute in the middle of the top cushion of the Snooker Table carefully angling it to their desired position. They then, with just as much care, place the bowl at a position on the chute before releasing it down the table toward the jack. The jack itself was released down the chute to set its position. If it touches the end cushion it is replayed and if it is closer to the cushion than 8 inches it is placed on the centre 8 inches away from the cushion. Play is in both directions and it is noticeable that the nap on the cloth has a marked effect on the draw /bias of the bowls.

The teams consist of 8 players and the matches consists of 4 games of pairs (all games consisting of 9 ends)In the evening league the visiting team take their bowls to the home teams club, Scoring in the Pensioners League – 1 point for each game won (half points for a drawn game). The same scoring system is used in the Evening League but with an additional point for for the team with the highest aggregate score.

The rules for Carlisle Pensioners League versions are printed below - 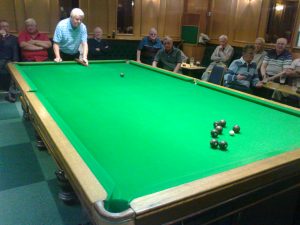 A bowl just released from the delivery chute makes its way to the 'head'.

Picture taken at the RAOB Club in Carlisle. 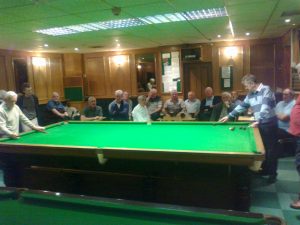 Picture taken at the RAOB Club in Carlisle

The Blackpool League have another version of the game with their own set of rules. They too generally play with old Lignum Vitae sets made by Taylor-Rolph. The main difference seem to be that they only play in one direction and use the 'D' and the centre baulk line spot (the position of the Brown ball for Snooker) for the chute to be placed. The jack used is a biased jack , so basically a smaller version of the bowls used.The writer was able to visit the Marton Social club, Blackpool to see a match and be shown the method of play. Our thanks go to Steven Murphy for all the information and to the Marton Social Club for their hospitality. The Guide lines and rules for the Blackpool League are as follows -

These rules are written with two players in mind

Played with a set of table bowls consisting of eight balls which are divided into pairs and indicated as such by numbers or colours.

If coloured bowls the they shall consist of 2 bowls per colour.

Game is played on a standard full-size snooker table.

At present in The Blackpool Bowling League match games are played to 7.

Bowls bowled from a ramp or a chute.

The bowling ramp or chute

The rear of the ramp can then be rotated through 180 degrees (i.e. from the yellow ball spot to the green ball spot) depending on the shot selected.

On commencement of the shot the ramp must not be physically raised and must lie flat on the table. When the player releases the bowl for the shot there must be no interference with the ramp, (sideways or raised) until the bowl leaves the ramp, which would otherwise alter the chosen shot.

When taking a shot a bowl can only be released from where it is positioned on the ramp and cannot be forced or pushed in any way.

The ultimate goal of the game is to get as many of your own bowls closer to the jack than your opponent.

The player who has drawn the lowest numbered bowl now bowls the jack from the ramp which he will follow by bowling his own bowl first.

Bowled from the ramp the main requirements of the jack are-

Distance wise it must at least pass an imaginary line across the table (width ways) where the blue spot is positioned.

Then where ever it rests in this area of the table it must be at least the width of a bowl away from any of the other 3 side cushions.

If any of these criteria are not met then the jack is to be termed as a dead bowl and the jack is then offered to the opponent to bowl. However although the first bowler loses the right to bowl the jack, he still bowls his own bowl first after his opponent has bowled the jack. Players will then bowl alternately.

At the start to determine who plays with which ever pair of bowls, one bowl from each pair (so four bowls in all) are placed in a concealed bad and away team player picks the first ball. Whatever number is chosen becomes the pair which the player uses. The player that picks the lowest numbered bowls will bowl the first jack and then his own bowl first.

Before the start both players have an optional 2 practice ends (4 bowls each).

As each player begins with 2 bowls then the maximum points that can be scored in an end is 2 points (1 for each bowl). This is of course if both their bowls are both nominated to be closer than their opponents. Where a players bowl is judged to be 1st closest and opponent is next closest then this scores 1 point for the player closest.

At the conclusion of each end the player who wins that end bowls the jack for the next end followed by his own bowl first.

Any player's bowled wood (bowl) that makes contact with any side cushions is taken off the table and is deemed void.

Where two player's bowls are simultaneously touching the jack after all woods have been bowled, this is deemed a dead end . No point scored. Whole end is void and is restarted with the same player, who began that end, given the jack and bowling first.

Where a player bowls a ball by mistake that is not their own then one of that players bowls is taken off and deemed void. The wrongly bowled ball is then returned to the player it belongs to.

Where any player bowls down the ramp and the shot results in the jack touching any side cushion then the whole end is void and is restarted with the same player, who began that end, given the jack and bowling first.

Note: This situation, where the jack makes contact with a cushion during play, is slightly different to the situation mentioned regarding the initial bowling of the jack where the bowled off jack is given to the opponent to bowl.

Bowl on and Good Luck

Anyone wishing to make contact with the Blackpool Table Bowls league can contact Steven Murphy by email - mrwomper@yahoo.co.uk. . He is keen to encourage more players sothat the League can grow. 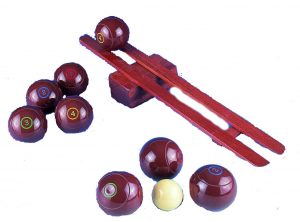 The set of bowls comprises 4 pairs of brown 2 ¼ inch dia. bowls, a jack and a delivery chute. Each pair of bowls has the same bias strength. The pairs are colour coded to be recognisable. The jack is a plain white ball (non biassed) usually 1 3/8” ( 1 1/4” has also been used). The chute has two rungs set apart down which the bowl is released. 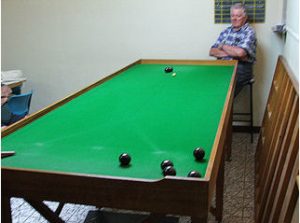 The set of bowls comprises 4 pairs of black 2 inch dia. bowls, a jack and a delivery chute. Each pair of bowls has the same bias strength(Note- the bias strength is considerably strong than any of the UK bias strengths. The pairs are colour coded to be recognisable. The jack is a plain white ball (non biassed) usually 1 3/8 inch ( 1 ¼ inch” has also been used). The delivery chute has a groove along its length down which the bowls are release. These table bowls look the same as the U.K. 2 inch Table Bowls .

Table bowls both 2 inch & 2 1/4 are available from the Thurston online shop.

Bowls Bias for Both Crown and Flat Green Bowls